When I tell people I write comics they typically say “Oh that’s cool!” And then moments later, “So you drew this?”

For people unfamiliar with comics, the process can be confusing to understand initially.

Every project is different, but my typical writing process is: concept, rough outline and then script. I’m using LIFE AT DUSK(link) as my example since I’ve worked on it most recently.

Let’s start with the concept. For LIFE AT DUSK, it was simple: suicidal guy gets bit by evangelical vampire.

I think about what the story is trying to say or sometimes I get ideas for scenes and build around them. The outline is a guide that helps me move the story forward. It doesn’t need to be long, just needs to organize my thoughts.

Here’s my rough outline for LIFE AT DUSK:
Snapshot of GUY’s life

Awake and confused in the hospital

GUY is greeted by an arrogant EMT

He’s put off by the EMT preaching to him

Realizes the EMT is a vampire

Realizes in shock that he is now immortal also

Next I try to determine the flow of the story and breakdown the story beats from the rough outline into panel and page increments.

From there I get more specific using the outline as my reference point and incorporate dialogue to finish the script.

Here’s Page 1 from the LIFE AT DUSK script: 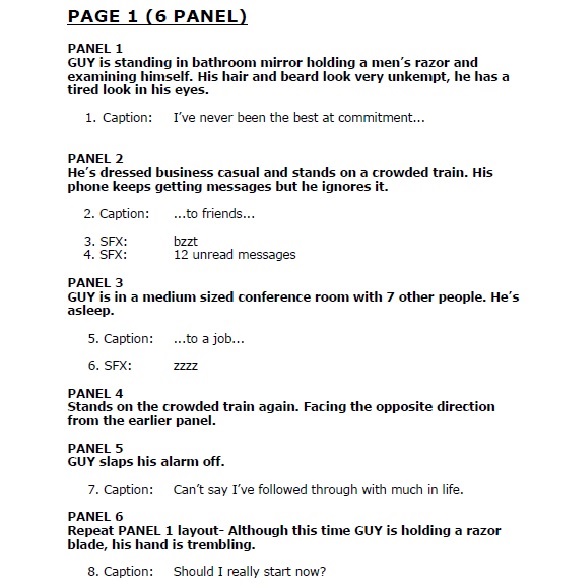 Every project is different but the script for this one is very straightforward and matter of fact.

Cool right? But what good is a comic script without an artist? I’ll discuss the process of working with an artist or art team in my next blog. Feel free to leave comments below.

Be In The Know

Sign up for news, blog updates, events, and more